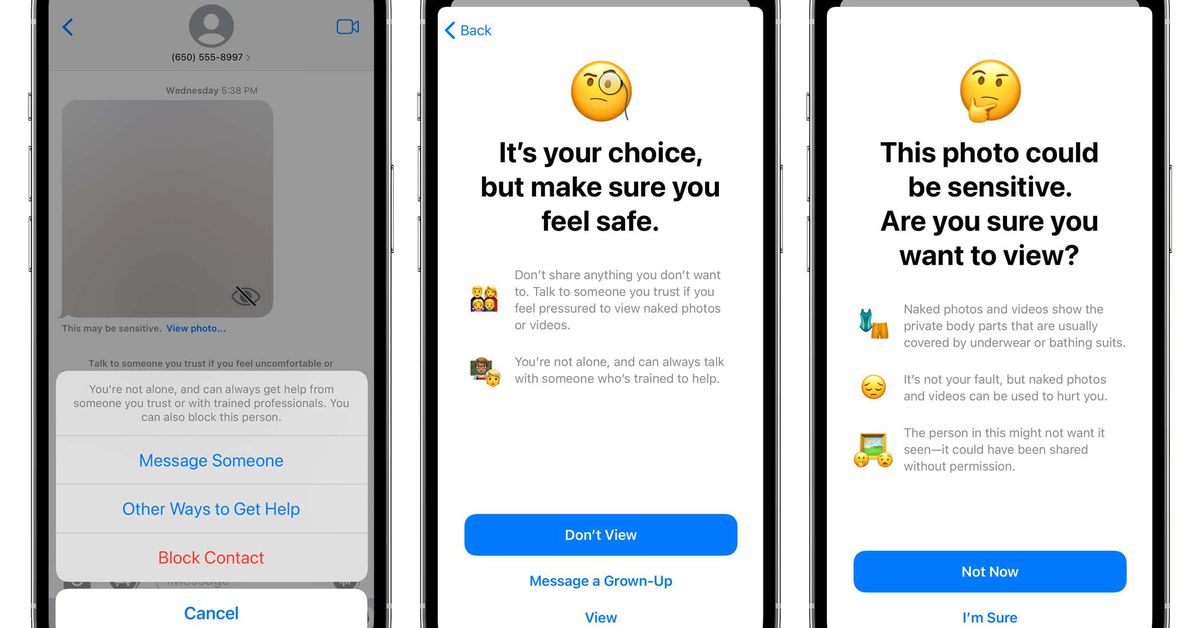 Apple’s “communication security in messages” feature, which is designed to automatically blur images of nudity sent to children through the company’s messaging service, is now being rolled out to other countries. After launching in the US last year, the feature is now coming to the Messages apps on iOS, iPadOS, and macOS for users in the UK, Canada, New Zealand, and Australia. Exact times are unclear, but the guard reports that the feature is coming to the UK “soon”.

Scanning is done at the device and does not affect the end-to-end encryption of messages. Instructions for enabling the feature, which is integrated into Apple’s existing Family Sharing system, can be found here.

The opt-in feature scans incoming and outgoing photos for “sexually explicit” material to protect children. If found, the image will be blurry and guidance will be provided on how to find help, as well as reassurance that it’s okay not to look at the image and leave the conversation. “You are not alone and can always get help from someone you trust or from trained professionals” reads the pop-up message. “You can also block this person.”

Message an adult about an image is optional

As with the initial release in the US, kids have the option to message an adult they trust about a flagged photo. When Apple originally announced the feature last August, it suggested this notification would happen automatically. Critics were quick to point out that this approach involved risks outing queer kids to their parents, and could otherwise be abused.

Apple is also expanding the rollout of a new Spotlight, Siri and Safari search feature that will point users to safety resources when searching for child sexual abuse topics.

In addition to these two child safety features, Apple originally announced a third initiative last August, which scans photos for child sexual abuse material (CSAM) before uploading them to a user’s iCloud account. This feature, however, drew strong opposition from privacy advocates, who claimed it would risk introducing a backdoor that would undermine the security of Apple’s users. The company later announced that it would delay the rollout of all three features while addressing the concerns. After releasing the first two features, Apple has yet to provide an update on when the more controversial CSAM detection feature will be available.