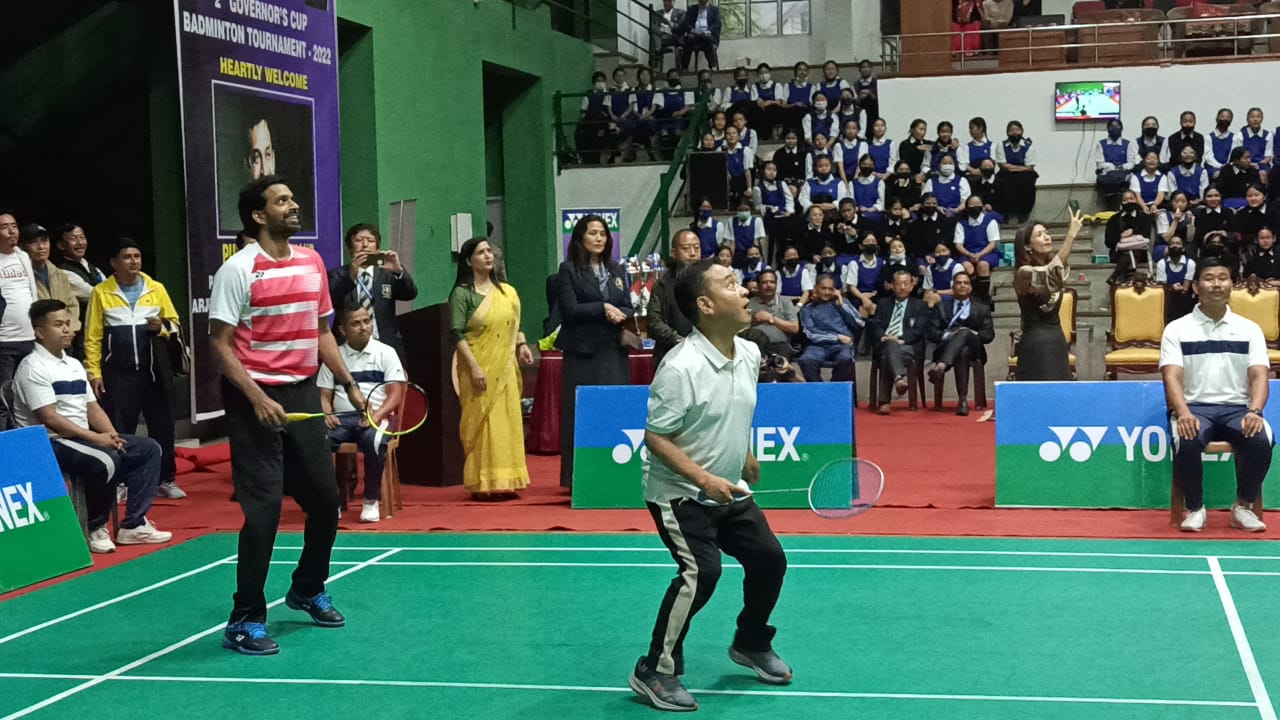 gangtok: Badminton legend Pullela Gopichand is currently on his first visit to Sikkim to attend the second Governors Cup for Badminton in Gangtok. Gopichand arrived in the state on Monday and was received for dinner by Chief Minister Prem Singh Golay in Samman Bhawan.

On June 14, Gopichand attended the final of the state tournament and played an exhibition match along with the governor of Sikkim, Ganga Prasad and CM Golay. In a heartwarming moment, 85-year-old veteran shuttler Yapchung Kazi also joined Gopichand during the exhibition game.

Speaking to the media, Gopichand said he found Sikkim very beautiful. He said: “It feels really nice to be in Sikkim, it’s a beautiful place, the hospitality and warmth of the people is amazing. To come here for an event like the Governor’s Cup for badminton is a wonderful thing. So many players from different blocks, from different professions participating in this event is great. I welcome this kind of government response to sports. Very encouraging to see the governor, the prime minister, the president participate in a sporting event, be part of the celebration of a sport.”

Speaking about the growth potential of badminton in Sikkim, Gopichand shared: “Yesterday (Monday), the General Secretary of the Badminton Association of Sikkim, Sukanta Das and I spoke with the Chief Minister about how talented players from Sikkim will be shown the right paths through the Academy (Gopichand’s) and various centers of the Badminton Association of India.”

He further shared: “The President and Secretary General of the Badminton Association of Sikkim have done an amazing job. They have always been active members of the Badminton Association of India. They have always tried to promote the sport. Infrastructure is something we need for sport. I would like to ask the government to look at the aspect of providing infrastructure. So that the talented young boys and girls of the state can perform more and more effectively at the state and national level. At some point, play for the country and bring laurels to the country.”

Focusing on the Northeast, Gopichand shared: “With the BAI president who is currently Assam Chief Minister Himanta Biswas Sarma, they are working to make the association stronger and bring a lot of work to the grassroots level. Our president is a dynamic leader, through his support we have a feeling that the players will see a lot of growth in the North East as well as the rest of the country in the coming future.”

Sikkim CM Prem Singh Golay welcomed Gopichand to Sikkim and claimed it is an honor to have the badminton legend. “We are well aware of the success of badminton legend Pullela Gopichand, who has produced many badminton players at national and international level in the country, including himself, as a legend in the sport. On this occasion I would like to share that Pullela Gopichand and the Badminton Association of Sikkim informed me during our interaction over dinner yesterday about the potential of badminton in Sikkim. With the same in consideration, we welcome the step of sending 10-15 talented badminton players to its academy or any of the Badminton Association of India centers for their training. Identifying such players is in the hands of Badminton Association of Sikkim, once they approve the same we will send such players to such renowned academies and ensure that they balance both their studies and sport at the same time.

Golay also said that in the upcoming budget session, the government will consider developing a state-of-the-art badminton court and training center here in Sikkim so that the state can generate more players.