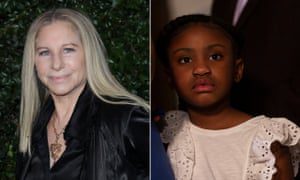 At the same time, people of the United States are seeking justice for the death of George Floyd, also many others who were killed because of racism. On the other hand, many celebrities, institutions, and communities are providing a helping hand to George Floyd’s family. Recently, famous American actor and singer Barbra Streisand did an amazing thing which will surely help Floyd’s family financially. She bought shares from Disney and then gifted them to Floyd’s daughter Gianna Floyd.

The six-year-old girl was glad to become a stockholder of Disney. She uploads the picture of the certificate and the package which was sent to her by Barbra. According to the sources, the package also included two TV specials, my name is Barbra (1965), and Color Me Barbra (1966).

However, no one confirmed how many shares were purchased by her but, still as a gesture of help, it is worth enough. Gianna posted a picture on her Instagram page in which she urged to Stop Killing Our Fathers. Her followers have increased a lot in the past few days and people are in full support of the child. The Floyd family is more than happy with the amount of love they have received from the people.