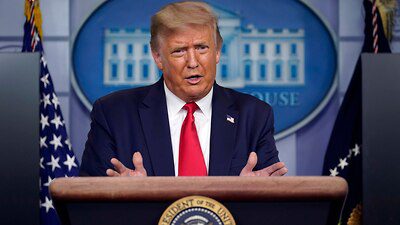 Trump had made the delay till the people can safely, securely, and properly do the voting. There is nothing that can support the claims of Mr. Trump as it was done through mail-in voting.

Due to pandemic coronavirus, US states had made voting through postal easier concerning about health of the public.

As per the constitution of the US, Donald Trump has no authority for postponing the election by himself until it got approved through Congress. On the two houses of Congress, the president does not have direct power.

What has been said by Trump?

In different tweets made by Mr. Trump, he said that mail-in voting would be the most fraudulent election is history and will be a great embarrassment for the USA. He also said that in those areas where it has been tried is a catastrophic disaster.

In June, in New York, voting was allowed through the post for party’s presidential candidate at Democratic primary poll. Long delays for ballots are counting and the result is still not known. A media report in the US states that ballots are not filled correctly due to which it is not calculated or not having postmarks, which are proof that it was sent before the end of voting. Other states are also conducting votes through the post.

Even it is just in the form of a question the President Donald asked on Twitter, but it has started the political speculations that could affect his presidential elections.

Is in the Power of President to Delay the Elections?

With more speculations going on Secretary of State Mike Pompeo when asked about whether the president can delay the elections, then he said that he didn’t want to get involved in something which is not proven yet. Further, he said that the justice department would “make that legal determination. we want an election that everyone is confident in.”

Many including the US Federal Election Commission Chairwoman Ellen Weintraub dismissed the idea of president delaying the elections.

On suggesting delaying is Not a Good Idea, McCarthy said, “Never in the history of the federal elections have we ever not held an election and we should go forward with our election.”

Democrats are also not liking the idea and confirmed that the President is not in a position to delay the elections. New Mexico Senator Tom Udall Said that “But the fact that he is even suggesting it is a serious, chilling attack on the democratic process. All members of Congress – and the administration – should speak out.”