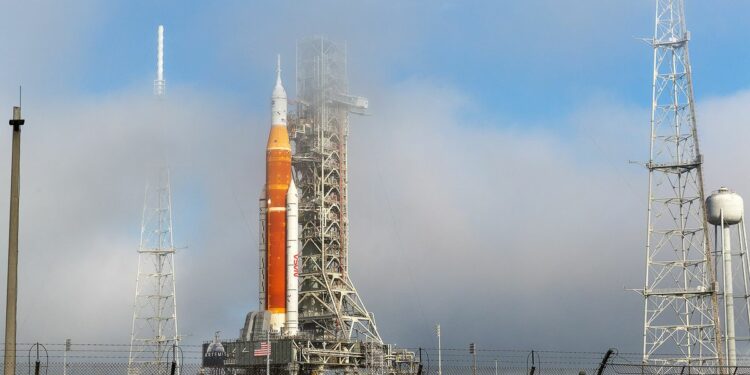 Over the next three days, NASA will host an extensive dress rehearsal with its massive new rocket, the Space Launch System, rehearsing all the key steps the agency must perform when the vehicle is launched for the very first time. It’s a major milestone for the rocket’s development and one of the last major tests it must undergo before the vehicle can be released to fly sometime this summer.

The Space Launch System, or SLS, is the agency’s new flagship rocket designed to carry people and cargo deep into space. It is set to star in NASA’s Artemis program, the agency’s initiative to send the first woman and first person of color to the moon by the mid-20s. Capable of lifting nearly 60,000 pounds of cargo to orbit beyond the moon, SLS is designed to launch NASA’s new crew capsule called Orion, which will carry future astronauts on their way to the lunar surface.

NASA wants to go through all the steps before launch

But before all that can happen, SLS just needs to be launched. The first flight, called Artemis I, is also a kind of rehearsal. The rocket will launch Orion — without any crew in it — on a four- to six-week mission around the moon, showcasing the vehicle’s capabilities. But before Which can happen, NASA wants to go through all the steps leading up to the launch, which is known as a wet dress rehearsal. The term “wet” refers to the fact that NASA flight controllers plan to go through the entire launch countdown, even filling the rocket’s tanks with ultra-cold liquid propellant, just as they will on launch day. “It closely tracks the launch countdown,” Charlie Blackwell-Thompson, NASA’s Artemis launch director, said at a news conference about the rehearsal. “There are some minor differences, but they are actually minor.” The main difference, of course, is that the countdown doesn’t actually reach T-minus zero, so there won’t be any real launch.

It’s a test that’s been in the works for nearly a decade. NASA and prime contractor Boeing have been working on SLS since the early 2010s, and there have been many delays and cost overruns along the way. The SLS rocket finally rolled out of NASA’s iconic Vehicle Assembly Building on March 17, fully stacked, and slowly made its way to its primary launch pad at the Kennedy Space Center in Florida. The launch pad, called LC-39B, was used for an Apollo launch and for multiple Space Shuttle launches.

Now it will be the primary home of the SLS and NASA wants to ensure that the infrastructure around the SLS can all work together for the first time. That includes all ground support systems – such as the huge mobile launch pad used to stabilize the missile during launch, as well as the various tanks and structures used to channel the cryogenic propellant into the missile. “There are thousands of components on the mobile launcher that have to perform,” Tom Whitmeyer, deputy associate administrator for common exploration systems development at NASA, said during the news conference.

In addition to testing the technology, NASA is also testing the capabilities of the vast army of flight controllers. Since this is everyone’s first time working with this equipment and going through these procedures, there will no doubt be a few issues that need to be resolved.

This afternoon at 5 p.m. ET, things kick off, when the launch team arrives at their stations. Shortly after, the flight controllers will turn on both SLS and Orion. However, the excitement doesn’t start until the morning of Sunday, April 3, when the team decides whether they are ready to continue refueling the vehicle. If they “go” for that, they begin to fill the SLS’s tanks with cryogenic liquid oxygen and liquid hydrogen and continue to replenish the tanks over the course of the day as the propellant inevitably boils.

After refueling, the flight controllers will count down to a predetermined “launch time” and finally reach the number of terminals. Just six minutes before T-minus zero, support teams switch Orion to internal power, followed by the missile itself. The countdown continues until T-minus 33 seconds, after which the teams manually abort the launch. They then go through a recycle, when they try to go through the last part of the countdown again, testing the team’s abilities to try a second launch attempt in case there is a delay on launch day. Again, they go through the number of terminals, eventually reaching T-minus 10 seconds before cutting things off again.

For those interested in following the test, NASA plans to provide detailed updates on its Artemis blog, as well as: send messages on Twitter† Live images of the SLS rocket are streamed on one of NASA’s YouTube channels.

However, in a somewhat controversial move, NASA will not provide live commentary or live audio of the rehearsal countdown loop. The agency cited restrictions around the release of information about how missiles work, which falls under the purview of ITAR, or International Traffic in Arms Regulation. ITAR is enforced by the United States Department of State and is used to control the export of certain technologies that can be used to make weapons. If a technology is listed on the US Munitions List, you generally cannot or must obtain permission to export that technology to another country or to a foreign national.

“We have to be very careful when we share data, especially for the first time.”

Missiles are on the US ammunition list because many of the same technologies used to build missiles are also used to make intercontinental ballistic missiles that can carry nuclear weapons. And while NASA has no plans to physically export the SLS rocket to another country, ITAR is also arranging for the release of what’s known as “engineering data” — basically the blueprints and other knowledge used to create and deploy rockets. operate.

Regarding the SLS, NASA says it is concerned about releasing valuable information about the countdown because adversaries could use that information to create their own weapons. “Normally they’re looking for timing and sequence data, flow rates, temperatures, how long it takes to complete certain tasks,” Whitmeyer said. “That is seen as important information by other countries. And so we have to be very careful when we share data, especially for the first time.”

It’s a curious position for a few reasons. First, the SLS runs on liquid propellants, while most ICBMs today run on solid propellants. Also, commercial companies like SpaceX and the United Launch Alliance (both of which use liquid propellant in their spacecraft) have made their countdowns public over the past decade without jeopardizing ITAR. Within ITAR, the regulations state that there are exceptions for the disclosure of technical data if it is already in the public domain.

“The existence of liquid rocket fuel can be found in a large number of patent applications and publications,” writes Jack Shelton, an ITAR attorney at Aegis Trade Law. The edge in an email. “But there are certainly many other pieces of information related to the SLS that are not in the public domain. Many of these are technological secrets that the US government may not want China to get their hands on.”

“These are technological secrets that the US government may not want China to get their hands on.”

NASA notes that ITAR restrictions have tightened since the agency launched the Space Shuttle. It’s also totally It is possible that NASA has received new guidance from the State Department about not releasing this type of technical data to the public. There may be a definition for technical data, but it is still quite vague and always subject to interpretation, which can certainly evolve based on current events and emerging technologies. The agency could be in trouble if it releases information that the State Department decides to be covered ITAR.

NASA also blames the lack of public information about the SLS being very new, but the agency plans to expand its coverage for the eventual Artemis I launch by releasing air-to-ground communications. “We’re really going to talk to the export control folks and share with them what we think is acceptable data, and then they’re going to verify that it’s acceptable data, and we hope that by the time we get to the launch, we’ll have a really good understanding,” Whitmeyer said.

For this weekend, hardcore fans can follow the updates online. It’s also a dress rehearsal for NASA’s social team, which is sure to be working overtime when Artemis I launches.