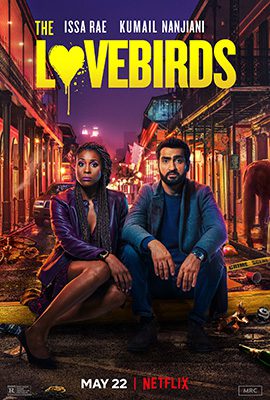 The new comedy series of Netflix, The Lovebirds, shows how the lives of couples turn around when someone uses their car for doing murder. In this they try to solve the mystery behind this murder to save themselves from this crime.

Jibran (Kumail Nanjiani) and Leilani (Issa Rae), after 4 years of their relationship they are dealing with small issues that could lead to cute backbiting. The chemistry between the two is the strongest shown at the beginning of a movie. But it attracts attention when they are getting fall in love or doing silly arguments. But there is no spark when they went for an adventure. Here the shift of movie takes on to action and comedy.

Some of the comedy which has been written a minor character is not at all charming and rips of comedians professionally. At some time Jibran gets nervous and starts reacting as a standup comedian, making all the things mixed up. There is nothing new in the comedy from the past. There is a similar type of fight scene, sharing of awkward riding experiences and these characters could not blend it well.

The thing which makes it different from others is that there is no focus on interracial only when they are running from cops, they hardly mention it. They said that cops will not believe them due to the race, what happens with them and it’s a reality.

A movie overall with different cast does a good job, rather than acknowledging how life could be for the character. But this does not make it bogged down. The comedy is somewhere familiar but a new ground break for the industry.

The villain of a movie, Paul Sparks is the best part of it. He delivers the lines in an unexpected funny way. The couple’s mission always gets gear when he is there in a scene.

Due to pandemic this movie has got into Netflix and it seems like to be a good move. It is a good way of distracting and enjoying comedy at your place.

Jibran and Leilani are good as a pair and hoping to see them working together in the future. Moreover, there are chances that we will not see again these characters. The Netflix series, ‘The Lovebirds will be starting from May 22.

Sen. Amy Klobuchar asked by Joe Biden to get scrutinized for VP consideration