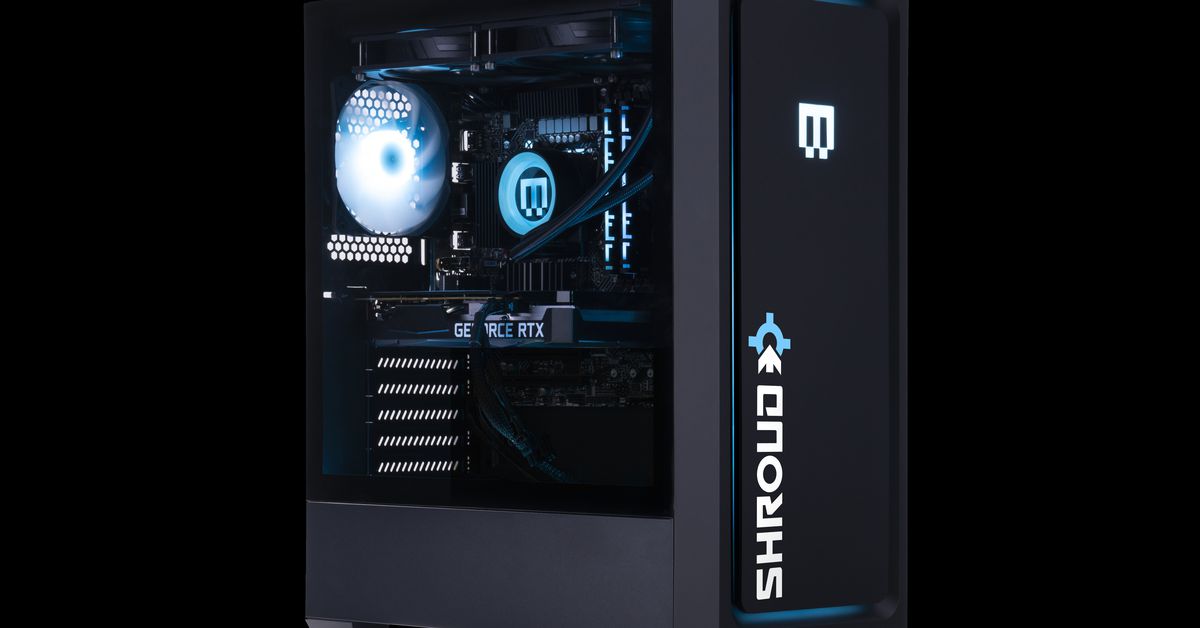 Maingear has been quietly hand-building custom gaming PCs in New Jersey for the past 20 years, forging occasional splashy partnerships to generate intriguing new systems. Now it’s teamed up with one of the world’s biggest streamers: Michael “Shroud” Grzesiek.

Today, the 50-person company unveils not only a new desktop born out of the Shroud partnership, but also a new corporate logo, as well as the “first full 3D product configurator”. That way you can spin around a 3D model before letting them charge your credit card for a pre-built gaming rig.

Get the “celebrity creative director” vibes here, but we’ll see!

Oh, and one more thing: Maingear says Shroud is now a co-owner of the company, whatever that means. “Shroud now owns a significant stake in MAINGEAR and as a co-owner, Shroud has worked with us on the MG-1, will work on all future MG products, and as an advisor will assist with strategic and business considerations where his expertise is incredibly valuable,” Maingear CEO Ron Reed tells me.

Maingear declined to answer questions about Shroud’s financial interest in the company, including whether he had invested any of his own money at all — rather than, say, receiving stock in exchange for his help. But Reed insists it’s not just a sponsorship deal or licensing deal to use Shroud’s name on products. “He’s part of Maingear, chair of our gaming advisory board,” says Reed.

A press release adds, “Shroud’s experience allows him to bring important insights into strategic and business considerations such as component selection, marketing initiatives, community building, as well as retail and e-commerce experiences.”

And, the company claims, he worked with Maingear on his new PC.

Two years ago, Shroud revealed he bought a Maingear Vybe PC, and Reed says he ordered several Maingear PCs himself after musician and producer Deadmau5 recommended the brand. He then became involved over the past year with the already under development Maingear MG-1, the new system being announced today.

There’s nothing obviously revolutionary about the MG-1 in terms of technology. What you’re generally paying for with a boutique builder is skilled labor and solid housing, neither of which is on a spec sheet. (GamersNexus, one of YouTube’s most discerning PC reviewers, recently called the Maingear Vybe one of the rare prebuilts to meet its standards, while also being a little disappointed with the case.)

But the system looks sleek, especially when you pay extra for its one cool trick: magnetic hot-swappable light-up front bezels with your own custom graphics. That’s probably popular with streamers who see themselves as the next Shroud. They are attached with four magnets, so there is no need to unplug anything and you can buy new ones separately. However, Maingear won’t be selling the entire case separately, Reed tells me.

Speaking of sleek, you can also configure these systems with Maingear’s new infinity mirror 280mm AIO liquid cooler, below, for an extra $15. As someone who’s a little allergic to brands, I actually don’t mind this new logo. Reed says it’s designed to bridge the generations of gamers, modern and retro, and be “versatile and different for everyone who watches it.”

Seems more like a Space Invader than a company, and I like it that way. Still, I’ll probably keep building my own PCs, because I’ve always enjoyed that.

The MG-1 should be on sale today. Formerly Shroud collaborated with Logitech on a branded mouse and put his name on other Logitech peripherals as part of a sponsorship.