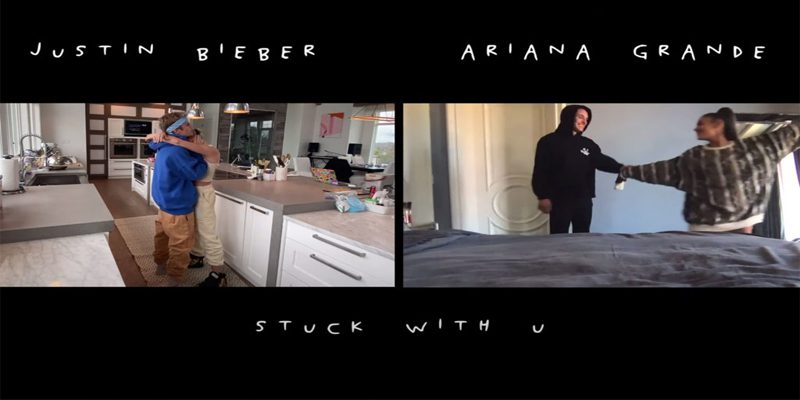 We do mind if lockdown goes forever, but Ariana Grande and Justin Bieber are the exceptions to this.

“Stuck With U” is the new music video launched by Ariana Grande and Justin Bieber. The songs showcase their euphoric experiences during the quarantine. The video also gives the fans a chance to look into the lives of other famous people during isolation.

It is a total 4-minute video and stars like Kendall, Gwyneth Paltrow, Demi Lovato, Ashton Kutcher, Max Ehrich, Brad Falchuk, Mila Kunis and Jaden Smith all have made an appearance. all of them appear in a clip for just 17 seconds but its fun to watch them. Most of the part of the video is focused on Hailey Bieber and Justin, Grande with her super-adorable Beagle.

Even a short clip was submitted by “Tiger King”, the well-known protagonist Carole Baskin but the clip wasnt approved by Grande as tweeted by her.

The video touches the emotion of common people too as it has random people’s special isolation moments with their dogs, children, video calling their far off family. The best part of the video is it also has a clipping of people holding signboards to thank the essential workers.

The video also gives the fans a glimpse of the voluminous kitchen of Bieber where he is seen dancing his heart out before he steps out in the field.

Grande is as usual full of makeup and is seen singing from the different locations in her home. Mostly she is seen in her bed and cuddling her dog.

Grande, in a full face of makeup and her usual tan, spends her shots in the video singing to the camera from various locations within her home, mostly her bed, while cuddling her dog. In the end, even Dalton Gomez, the realtor who is currently dating Grande is seen dancing with her.

The video was premiered on 8th May and has been produced to raise funds for the First Responders Children’s Foundation. There are already 4.5 million views on the video in less than 8 hours.

Have you watched it yet? Do give your comments on how you liked the video and your favorite part.