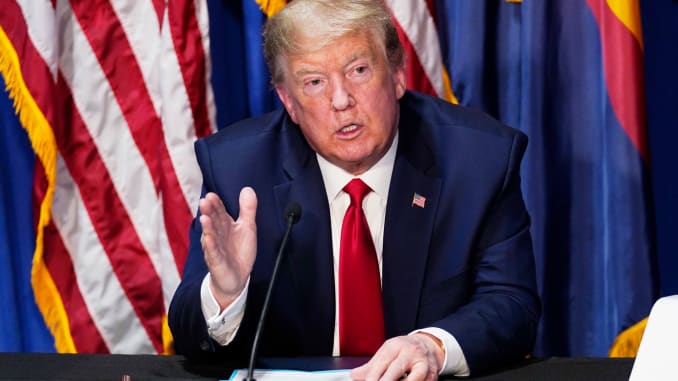 During an interview with Donald Trump, there was a shocking acknowledgment by him that, “there would be some more deaths” as states are urging hard to reopen their economies & relax some lockdown restrictions.

Upon being asked if there would be a loss of lives in the desire to ease home stay orders and other social distancing norms, Trump said, “there would be some because you won’t be locked into an apartment or your building or whatever it is.

But at the same time, we Americans are going to practice social distancing. We will be washing hands. We will be doing a lot of the things that we’ve learned to do over the last tough times we have faced. And finally, we will get our country back and running. See what is happening to the economy to the people of the nation. A lot of people are unemployed. The economy is standstill. We have to bring everything back, back to normal, and that is what we will be doing.”

Further in the interview, Trump said- As a state heads-Governors of different states are facing the challenge of unemployment. Each to protect its state and people, have to take a hard decision to reopen. The reopening will cause some damage but to keep the economy going have to make that decision.

Trump being himself leave no occasion to criticize the former president Barack Obama. On being asked by the interviewer about the amount of emergency funds left by the predecessor? Trump said there was hardly any left.

Even so, when the president was enquired on why his administration didn’t replenish the same in three years since he has been in office.

Then came a typical Trump reply “Well, to be honest, I have a lot of things which are going on at the moment,” Trump said. In making this country unsuccessful many are to be blamed. They wasted their time on issues like Russia, Ukraine and impeachment of the President for no reason.

Vice President Pence on Tuesday confirmed his plans to disperse the White House coronavirus task force by the end of this month, even though many health experts have gone on to say that the crisis won’t really end until a vaccine has been produced. One model also showed that there could be as many as 135,000 deaths alone in the U.S by the end of  August.

Final concluded statement by Donald Trump- Loss of lives can be expected by the virus, with or without a vaccine. He further praised the progress been made with vaccines but we all know how hard it is been from the last 3 months. According to Johns Hopkins University, there have been 72,271 deaths from coronavirus in the U.S. alone and 1,237,633 confirmed cases.