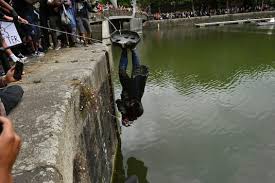 Black Lives Matter protestors toppled the 125 years old statue of Edward Colston in Bristol. Colston was a 17th century slave trader. The Bronze memorial had stood in city centre since 1895

The incident took place on Sunday. Thousands of people attended the demonstration in Bristol, the protest sparked by the death of George Floyd while he was under arrest in Minneapolis in the United States last month.

The statue was pulled down using rope and was dragged the short distance to Bristol Harbour and dumped over the quayside.

Demonstrator also leaned on the statue’s neck on knee imitating the choke hold used by US police against George Floyd.

Police have launched an investigation into the destruction of the statue. No arrest were made, but officers are now said to be collating footage of a “small group of people” who were filmed pulling down the statue with ropes, which police say amounted to criminal damage.

Colston’s memory has divided the city for years, with some thinking history can’t be changed and others campaigning successfully for his name to be erased from streets, schools and venues. They consider him as a man whose ships sent about 80,000 men, women and children from Africa to the Americas between 1672 and 1689.