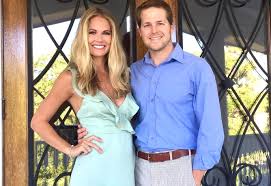 Cameran Eubanks the star of “southern charm” said that rumors about her husband, Jason Wimberly of being unfaithful were not the reason to exit out of the bravo series. A day after she announced that she was quitting “Southern Charm,” Eubanks took to Instagram on Wednesday evening to address some rumored reports about her marriage, also revealing the real person behind her marriage.

In an Instagram post she shared her feelings about the rumors and the reason of her leaving the show. She also expressed how she is not surprised of such rumors. Let’s have a look to her Instagram post-

She continued her post she added that it disgusts her how false rumors dragged so much. In the praise for her husband, she added that he is a wonderful man and has supported her at every moment.

She also mentioned that her husband always supported her while filming the show even though he wanted no part of the spotlight. Adding to it she said that she can’t get too upset though because this is what you sign up for when you put yourself on a reality TV show. She mentioned that she’s getting out of it now. Drama is needed to stay relevant on reality TV and sadly false rumors about others are sometimes created.

Adding to it, she told that her decision was made and given to bravo months ago and had absolutely nothing to do with ridiculous and fake rumors about her marriage. She also pleaded to disregard any fabricated matter. “now I absolutely know I was smart to leave the party early. My gut never failed me.” She concluded also by thanking everyone she’s worked with.