by Jaya Bharti
in Trending
0 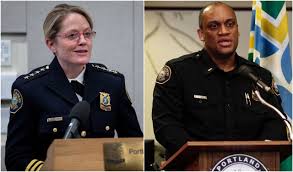 Protests and demands for changes to policing have grown across Portland since the Memorial Day death of George Floyd, a Minneapolis man killed by a police officer who pressed a knee into his neck for nearly nine minutes.

Amid the massive demonstration Portland Police Chief Jami Resch announced her resignation marking the end of her tenure as the bureau’s chief after six months. Lt. Chuck Lovell, an Afro-American officer going to be her replacement.

At a press conference on Monday Resch said : “I have asked Chuck Lovell to step into the role as chief of the police bureau. He is the exact right person at the exact right moment.”

Resch took this on social media also. She wote : “I have listened and our community and you have said show us change. PPB needs to be the leader in change. It starts with trust. This change in leadership comes from my heart.Chuck Lovell has been dedicated to service his entire life. I am 100% confident in him and his leadership.”

“To say this was unexpected would be an understatement,I’m humbled. I’m going to listen. I’m going to care about the community, and I’m looking forward to this journey,” Lovell Said.

Portland Mayor Ted Wheeler said he was surprised by Resch’s decision, but he was “100 percent confident” that Lovell “is the right person for this job.” “Together we will work on meaningful, bold reforms,” Wheeler said.

Beyoncé Appreciate the Efforts of Protesters of #BlackLivesMatter

Beyoncé Appreciate the Efforts of Protesters of #BlackLivesMatter