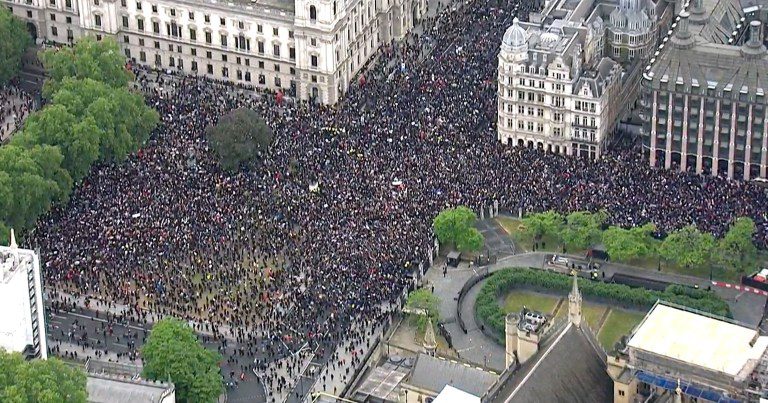 #blacklivesmatter. Thousands of anti-racism protesters have gathered on 6th June 2020 across the UK, defying calls from ministers and police chiefs to avoid mass gatherings.

Protest spread across the US after a video emerged of a white Minneapolis officer pressing his knee on a handcuffed Mr Floyd’s neck for nine minutes as he repeatedly cried ‘I can’t breathe’. Since then protests against white supremacy have spread across the world.

Protestors gathered outside Parliament Square and Whitehall in Westminster for peaceful protests over the weekend.

Marking a minute’s silence in memory of Mr Floyd, gathered protestors kneeled and raised one fist in the air opposite the Palace of Westminster, before chanting ‘no justice, no peace’. Holding banners reading “The UK is not innocent”.

The majority of people in Parliament Square were wearing masks and face coverings, with some also using gloves and hand sanitizer gel. Some placards referred to the pandemic, with one saying: “There is a virus greater than Covid-19 and it’s called racism”.

Home Secretary Priti Patel said the social distancing advice was “for the safety of all of us”, while Met Police Commissioner Dame Cressida Dick said the protests were “unlawful”.

There were similar scenes across the country, with silences being held in Manchester’s Piccadilly Gardens, Cathedral Square in Peterborough, Cambridge and Milton Keynes where crowds were able to socially distance in large spaces.